After asking around we finally found a couple of locally owned restaurants serving southern fare.
Mama's Farmhouse is Southern Cookin'- Family Style, aka all you can (and shouldn't) eat. 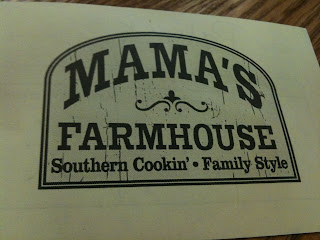 A little lacking in the atmosphere, but enough food to put us all into a food coma. 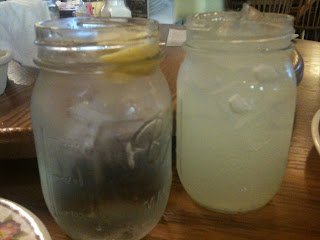 The Drinks were served in charming Ball jars. Good idea for a southern dinner or picnic. 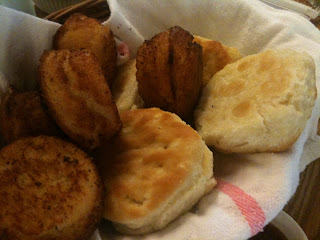 Biscuits and corn muffins to start served with maple butter. 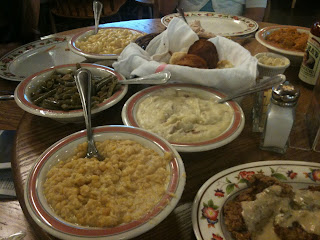 Then..........more food than you can imagine. Chicken fried steak, fried chicken, turkey with dressing, mashed potatoes, sweet potatoes, green beans, gravy, corn pudding, macaroni and cheese.
And then banana pudding or peach cobbler to top it off!
Another night we got catfish @ Pop's Catfish, which they said they get from Mississippi .

I just heard about a new movement called Meatless Mondays. For our health and to reduce our carbon footprint. Some restaurants are embracing it with entire menu's going meatless on Monday's. I like the idea of it being a certain day and just making it happen once a week. Not too much to ask of us all but what an impact we can make. Check out the website for recipes and inspiration!
Meatless Mondays (I wonder if that'll ever catch on in Tennessee?)
Posted by Scott at 5:48 PM No comments:

I've been desperately trying to find some "local " eats while visiting Tennessee this week. So far it's been dominated by chain restaurants and All You Can Eat buffets, which I think should be outlawed except for maybe teenage boys. We had some great barbeque at Corky's BBQ in Pigeon Forge.
I finally found something fun and unique! We just stopped at an out of the way country store and I got these deep fried peanuts! You eat them shell-n-all. 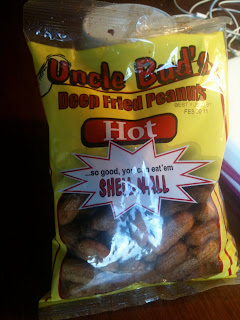 They're surprisingly good, spicy, and addicting.
I'll continue my search for some Appalachian vittles.
Ya'll come back now.
Posted by Scott at 12:19 PM No comments:

A few weeks ago we went to the Art in the Park festival in Staunton at Gypsy Hill Park. Very nice event and while we were there we got hungry for lunch and someone recommended an easy walk to Jimmy Anderson's Food Mart. 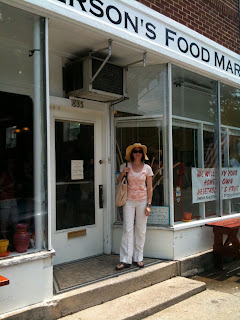 It's a quirky little grocery and deli that makes good sandwiches and soups. (Don't go if you're in a big hurry). My favorite part was the Queen City Brewing Soda's that they had for sale. 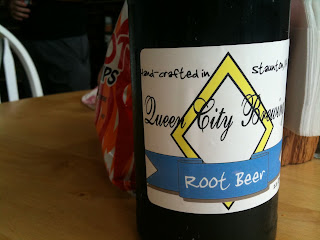 We got a couple of root beers and sat down for the wait for our sandwiches and before we could wonder where they're brewed, we looked out the window and across the street  saw...... 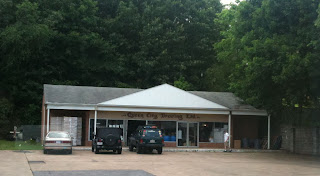 The Queen City Brewing !!
Those soda's didn't have to travel far.
I had a nice dinner with friends at Three Notch'd Grill in Crozet this week.
I asked about their most local item on the menu and they recommended the rag mountain trout stuffed with asparagus, leeks and brie. Really delicious and locally caught! 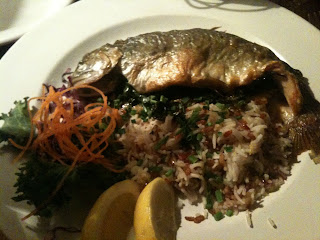 My lovely cousin from Arizona that visited last week said she was having a little thank you gift sent, so to be on the look out for it this week. The UPS guy pulled in the drive way and left two boxes from Dean & Deluca. I was immediatly excited to see what was inside.
First was a lovely bottle of Savingnon Blanc from Rudd Vineyards in CA. 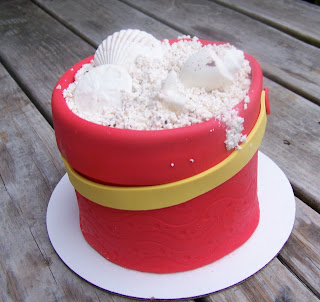 Then there was a cooler box containing this ridiculously cute sand pail cake. The entire thing is edible!
The shells and sand are white chocolate, the inside is chocolate cake, and the outside is a fondant.
You too can order one from deandeluca.com !

I made deviled eggs from our chickens' eggs last week for a gathering. Fresh eggs are so hard to peel, so I did a little research to see if there was a way to make it easier. The most common recommendation was to put them in ice water immediately after the boiling water and let them sit for awhile. No such luck here, it took me about an hour to peel a dozen eggs. Next time I get a craving for deviled eggs I'm using store bought eggs. I did use one double yoker which made for a very amusing deviled double yoker. 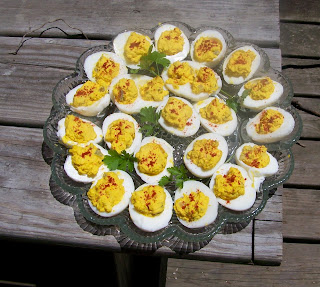 It's blueberry and raspberry time again! The blueberries are so big this year. I need to go back and get more for canning. Our local berry patch is so popular (over picked), they've really limited the hours of picking. 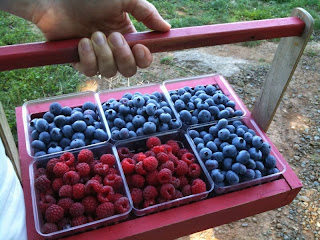 I had a big dinner for visiting cousins last weekend and used some of these berries to make
raspberry tiramisu. 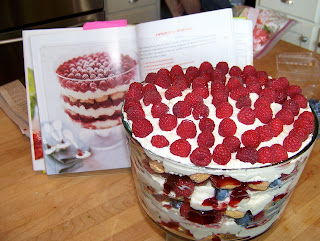 My dad came up to see the visiting family and decided since they are from Arizona maybe some good Virginia soft shell crabs would be fun to serve. 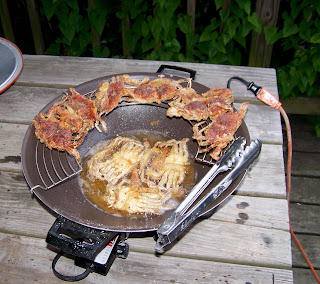 He loves to use an electric wok, so he sauteed them up in that. 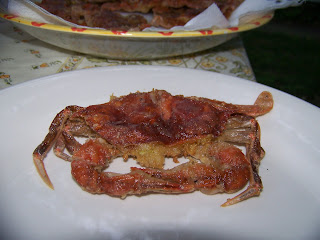 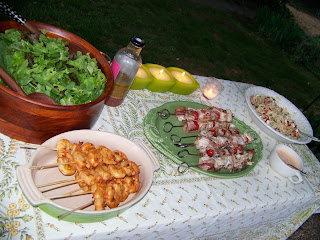 I rounded out the dinner with spicy grilled shrimp, mahi mahi kebabs, orzo salad, fresh greens from the garden and bread.
It was a lovely night catching up with family.
Posted by Scott at 6:12 PM No comments: 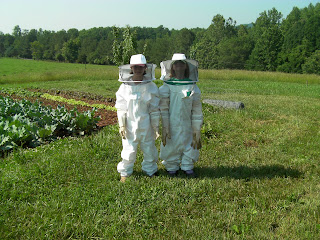 They donned the proper attire and then helped Lillian's Dad transfer the honey combs to another box to get to the honey. She was very brave and interested in the whole process. 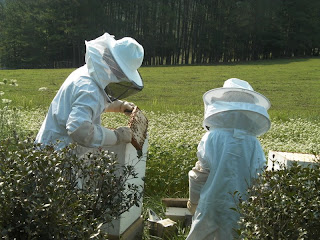 They spun it out of the combs and then put it into jars. 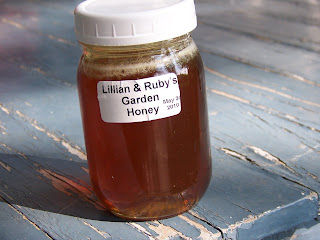 She  came home with jars of honey and lots of fun facts about honey bee's and the workings of a hive.
She's been eating honey on everything since then. It's wonderful raw local honey.
Maybe I'll get to watch (from a distance) next time.
If you're interested in keeping bee's here's a great article from Mother Earth News called Keep Bee's Naturally .