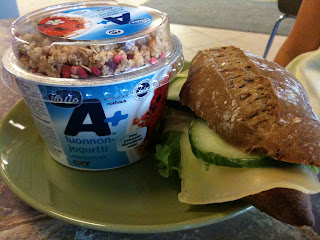 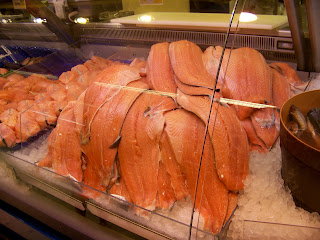 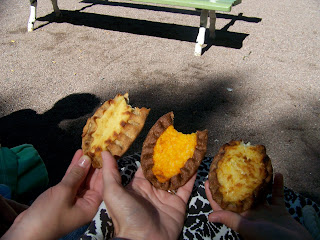 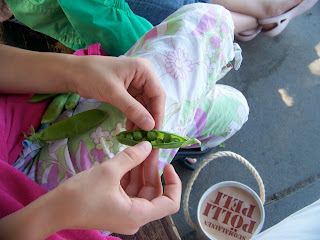 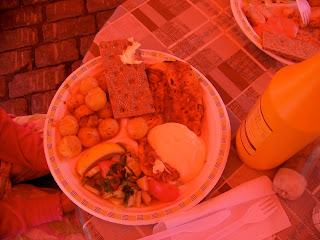 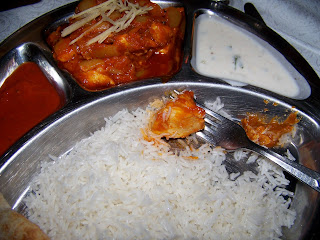 We went to some friends' house for dinner the other night. They had just been to Charleston, SC where they took The Taste of the Lowcountry cooking class at the Charleston Cooks, Maverick Southern Kitchens. They were inspired and even brought back the grits from South Carolina.
Even their third grader was into it so he was our chef for the evening. Very cute.
He's really on to something because every girl loves a guy that can cook! 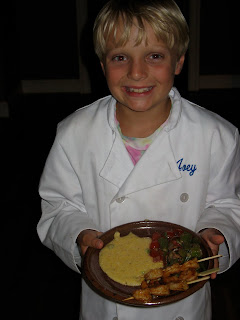 For the menu, which they printed up, we had grilled shrimp with low country seasoning, cheddar scallion grits, and warm okra and tomato salad with walnuts. All delicious together. 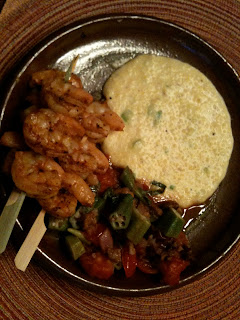 I don't think to make okra very often so I asked her for the recipe.

Warm Okra and Tomato Salad
Water
Salt
1 to 2 large tomatoes
½ pound okra
1 T unsalted butter
¼ cup canola oil
1 onion, diced
¼ cup toasted walnuts
½ cup sherry vinegar
½ pint grape tomatoes, halved lengthwise
1 T minced garlic
1 T sugar
3 T basil, cut in thin strips
Salt and pepper
1.)     Fill a large stockpot 2/3 full with water and place on high heat.  Salt the water and bring to a boil.
2.)     Fill a large bowl with ice and water to make an ice bath
3.)     Score bottoms of tomatoes with an x.  Place tomatoes in boiling water for 10-15 seconds.   Pull the tomatoes out and place in ice bath.   As soon as the tomatoes are cool enough to handle, removed from ice bath and peel off the skin.  Cut tomatoes in half horizontally and squeeze out the seeds.  Roughly chop the tomatoes.
4.)     Cut off stems of okra – discard.  Slice okra into ½ inch segments on the diagonal.
5.)     Melt butter and oil in large sauté pan over medium heat.  Add onion to the pan and cook until translucent
6.)     Add the okra, walnuts, vinegar, chopped tomatoes, grape tomatoes, garlic and sugar to the pan and cook for 2-3 minutes.
7.)     Add the basil to the pan and immediately turn off the heat.  Season to taste with salt and pepper.
Posted by Scott at 11:11 AM No comments:

For a couple of weeks I had a plethora of summer squash. I love it and am always looking for interesting ways to enjoy it. I did a basic sauté with onions but at the end, added pesto and it really complemented the squash. We also grill it a lot. Slice it the long way and brush the slices with olive oil with some herbs and salt and pepper.
I remember my mother  freezing a lot of vegetables so I wanted to give that a try too. 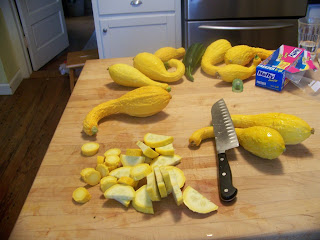 Wash, trim and slice up the squash. 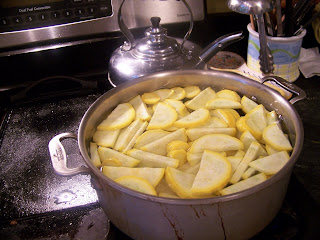 Put it into boiling water for about 3 minutes. 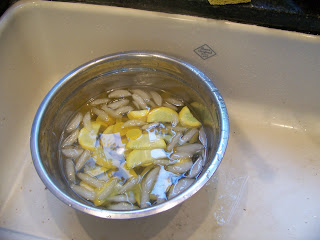 Immediately put it in ice water to stop the cooking.
I did this in batches. 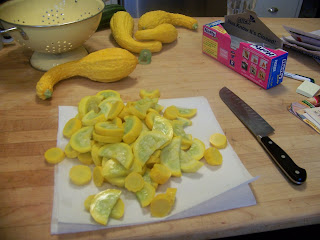 Lay on paper towels to try a bit. 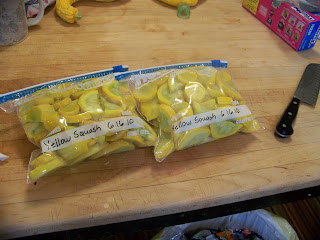 Bag, label and freeze.
In a couple of months I can whip out some home grown squash from the freezer.

For my first Meatless Mondays I made Thai Squash Soup. The recipe calls for it to be served cold but we ate it hot and it was fantastic. I may have to actually buy some squash just to make more of that soup.
Posted by Scott at 9:29 AM No comments: