Week two for me with French Fridays with Dorie. The assignment, Spicy Vietnamese Chicken Noodle Soup. It was much easier than I imagined, but I did take a short cut. Since I already had some ground spices on hand, I used them instead of the whole spice or seeds. For instance, the recipe called for two points of a star anise, coriander seeds, and white peppercorns. I had ground anise, ground coriander and ground white pepper so I used that instead. Shown here with my fish sauce. 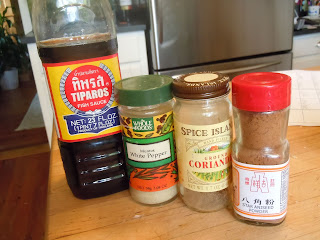 Otherwise very straight forward recipe. Just a yummed up version of chicken noodle soup. Next time I get a cold, I'm making this. I wanted it a little spicier so I put a dab of thai red curry paste in my bowl.
I got my chinese egg noodles and ginger from C'ville Oriental. Look at how fresh and plump their ginger is. 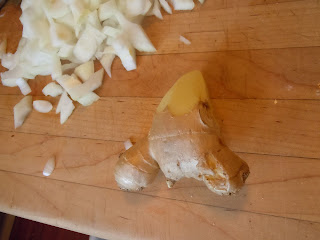 And if, like me, you're wondering, 'why is Vietnamese soup in a French cookbook'?
Since Vietnam was a French colony years ago, there is still a big influence of Vietnamese food. Lucky French! 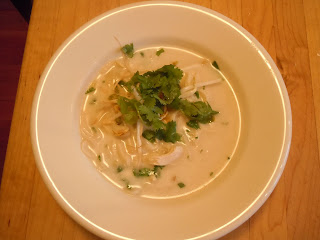 The book again is Around My French Table by Dorie Greenspan.
Posted by Scott at 5:34 PM