We went to a fun event last week at Orzo Kitchen and Wine Bar.  Darden (UVA Business School) put together their own Iron Chef competition. There were three groups of four competing. First up were the professors, then the second years, and then the first years. Each group got 50 minutes in the kitchen to put together an appetizer, an entree, and a dessert. The secret ingredient they all had to use in each course was pork. I think they got to make a plan ahead of time and bring one bag of groceries. They had to work quickly and were working up a sweat while we stood around sipping wine and cheering them on.
There were three judges, one of them was Charles Roumelioties a co owner of Orzo. It was very nice of him to let them use his kitchen. It was perfect for this because it's open to the restaurant. The other judges were the owner of Feast and another gentleman that runs a local farm that sells meat.(maybe he provided the pork?) 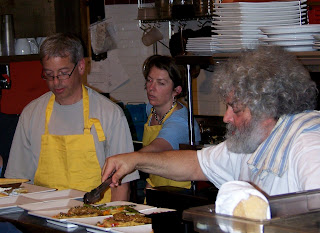 Here the professors are plating their entree.
After the judges tasted each course, we tried to get our hands on it to get a taste too.
Here's the beautiful dessert from the professors. 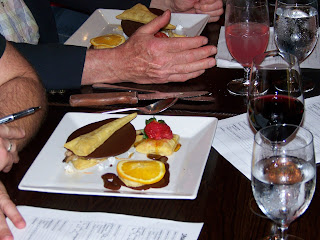 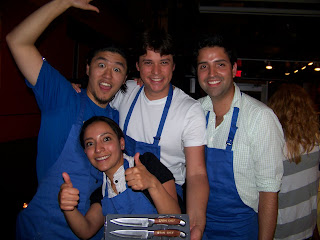 We're trying to figure out how to recreate this with friends at home. Each couple gets a certain amount of time and has to use some kind of secret ingredient to put together different courses for a meal. Should be a blast!
Posted by Scott at 2:16 PM