I had never cooked venison until recently. A  neighbor of ours is a hunter, so last fall he gave us some deer meat. He explained that if you're skilled at cutting it up and don't let the knife that's cutting the meat touch the bone, it won't have that gamey taste. I've eaten very little venison in the past. He gave us a pack of ground meat and a pack of steaks. So I had to ponder what to do with it!
A few months back I decided to tackle the ground meat. The girls asked what was for dinner so I said "burgers". No lie there. I even mixed in some ground sausage because someone told me that would give it a nice flavor and keep it from getting too dry. We grilled them and they were really good. When everyone was finished eating, I asked the girls how they liked their first venison. After some screaming, one actually admitted to liking them better than regular beef burgers. The others were still in shock. So much of eating anything different is in your head. 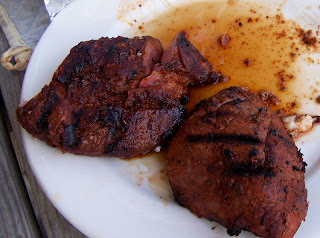 Then I looked around for what to do with the steaks. Our local paper did a write up in the food section on venison steaks over smashed cauliflower. It was flavorful and still not gamey but I think we all liked the burgers better.
We thought our chickens had stopped laying for awhile, when our neighbor brought us over to see what she found in her garage. 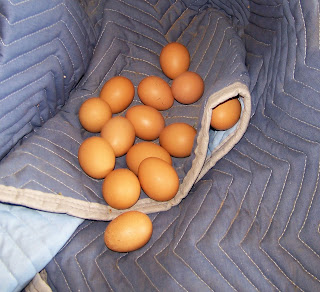 14 eggs! I guess their nesting box in our shed just isn't up to their standards. They seem to prefer moving blankets.
Posted by Scott at 1:49 PM