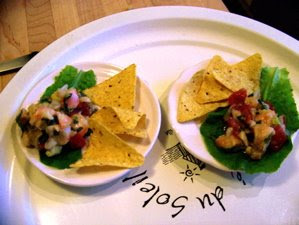 I put a dinner for 12 at our home up for the silent auction at our school fundraiser recently and had to come through with the meal. Yikes!
I opted for mexican because it was supposed to be near Cinco de Mayo, but got postponed. I got some Mexican cookbooks from the library to do some research and come up with a menu. We started with simple margaritas served chilled but straight up, so we called them margatinis. The first appetizer was ceviche which I did with shrimp because I don't live by the ocean and was a bit leery of the freshness of the fish I could find.
Then we made jalapeño poppers on the grill. They were a big hit. Half were stuffed with corn and cheddar and half with chorizo and monetery jack. I found one of the roasters like Williams Sonoma sells at Tuesday Morning for very cheap, and it worked really well. I got the jalapeño recipes from Williams Sonoma. I also fixed up Sam's Club fresh salsa with some cilantro and chipotle tabasco and it really improved the flavor for a dip with chips. 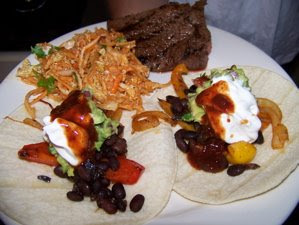 The meal was Carne Asada (mexican style grilled steak), slow cooked spicy black beans, grilled peppers and onions, rice, jicama slaw, guacamole, sour cream and chile de arbol sauce (yummy from a jar). And of course corn tortillas and huge flour tortillas. I found the great Abuelita brand ones at
C'Ville market. My friend Joanne turned me on to them years ago and they are the best if you're not making your own. I know my limits when it comes to feeding 12!
My only disaster was the rice. I tried the mexican way where you saute the rice in hot oil first and then add the warmed liquid. I added too much liquid so it was mush. Oops!
Then we topped it off with key lime pie.
It was a fun night and raised $540. 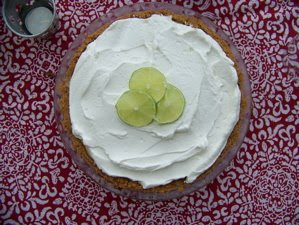