Last of the tomatoes

A week of below 90º weather and I was craving some hot comfort food. It's already hot again now, but last week I indulged in some eggplant parmesan. I love this recipe so much because after coating the eggplant, you bake it instead of frying it. It doesn't soak up all that oil, but once you layer it with the sauce and cheese it's still so fullfilling. I served it with some penne, a salad, french bread, and red wine. Mama Mia!
It makes enough for two dishes so one is in the freezer for another night. 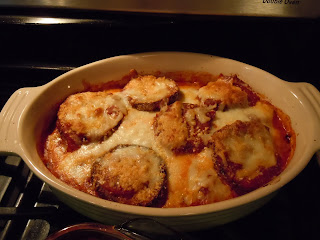 I tried to take advantage of the last of the tomatoes. I ended up with a ton of very small roma tomatoes. I found a really easy way to make them into sauce and freeze it. I gathered all of the tomatoes I could, washed them and cut the very top stems off. 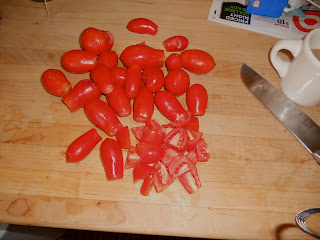 Then I  put them in batches in the food processor, skins and all. I transfered all of that puree to a big pot and let them cook down at a simmer for 6-8 hours. 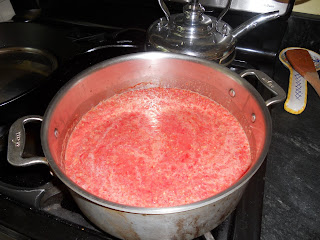 They started out with a lot of liquid. But after 6 or more hours they got really thick and the skins just cooked away but gave it a beautiful color. 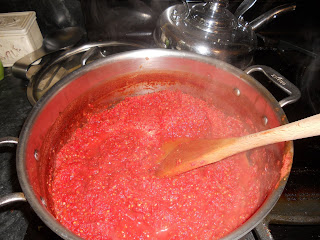 I ended up with a few bags for the freezer. I didn't put any seasonings in it yet. Depending on whether I use it for pasta or chili later I can flavor it up then. It would be worth buying up tomatoes at the farmers market while they're so delicious if you don't have a garden, just to freeze some sauce for later.
Posted by Scott at 12:05 PM